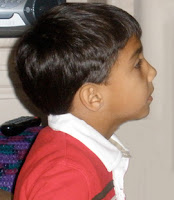 Yesterday (Saturday) Cliff and I drove down to Salinas (a little over an hour away down the freeway) to visit a dear friend.  It was raining lightly when we pulled out, but cleared a bit later as we cruised down the highway.  Cliff is a very careful driver, and it was a comfortable ride.

Zackery is an adopted child, and came to Elaine when he was only a day and a half old.  He was a sickly, difficult child, and Elaine has had her hands full.  Zack can be stubborn and insistent on having things his way, and as he has grown older, he has been hypersensitive. 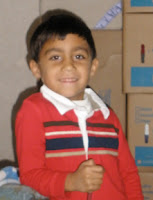 Zack is now six years old, and in the first grade.  Turns out that this is one very bright youngster, and yesterday he was considerably more calm than I had remembered.  He refers to me as “Grandpa”, which is strictly an honorary title.  Well, I’m old enough.  Anyway, yesterday he wanted to read to me, and Elaine warned me that his vocabulary is not what one expects from a six years old. 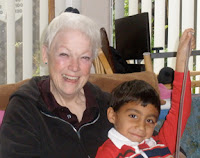 He brought a comic book style book, and read me a story about a young boy going to school for the first time.  Zack read, “I am going to preschool.”  Preschool?  What happened to “Run Jane, run”? The story told how this  hyperactive boy was afraid to leave his mother, hugging her legs, and how the teacher and others helped the boy to adapt.  Zack was reading most all the words -- teacher, advise, school -- and many more, and asking my help on other, more difficult words, like ‘psychologist’.  I think there may be adults who would stumble over ‘psychologist’.  In short, I was astounded, not only with his knowledge of so many words, but his ability to read with feeling.

Elaine’s love for this tyke is palpable, and he has responded well to her mothering.  We wish them both well.


Humor --
These are supposed to be true.  Maybe so; maybe no.

ARE WE COMMUNICATING? ??
A man spoke frantically into the phone: 'My wife is pregnant and her contractions are only two minutes apart'.
'Is this her first child?' the Doctor asked.  'No!' the man shouted, 'This is her husband!'

NOT THE SHARPEST TOOL IN THE SHED!
In Modesto , CA , Steven Richard King was arrested for trying to hold up a Bank of America branch without a weapon. King used a thumb and a finger to simulate a gun.  Unfortunately, he failed to keep his hand in his pocket.
Posted by Don Meyer at 10:51 AM