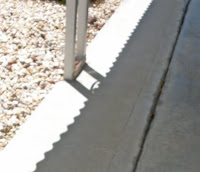 When Amalie and I moved into our new mobile home in 1971, there was already in place a concrete driveway. However, there was a strip of dirt about 14 inches wide on the side of the driveway away from the house, and a few years later we had someone fill in that strip with cement. Somehow a small bit at the very front of the drivewa

y did not get filled in. For a long while that didn’t make any difference, but lately it has.

Cliff pulls into the driveway, and keeps the van to the left so that I have room to get out. But when I when I go to use the scooter, I have to bump over that rocky part in order to avoid scratching the car. And it’s quite a bumpetty bumb debump clomp! So I called my favorite contractor, who has done a lot of work for me over the years, and he said he would come by to have a look and give me an estimate -- his usual procedure. That was a week ago, and no contractor, yet. I’ll have to give him another buzz.