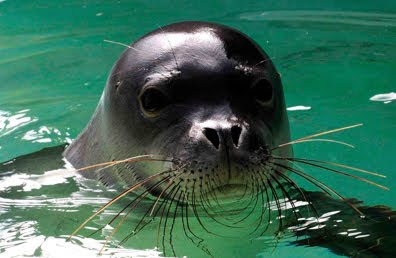 This article was in this morning’s paper, and I just had to share it with you. The text and photos are from the website and newspaper.

This is about a young Hawaiian monk seal named Hō‘ailona. (No, I don’t know how to pronounce it.)
Hō‘ailona was abandoned by his mother soon after his birth in May 2008. He was rescued from a beach on the island of Kaua‘i, cared for by scientists from the National Atmospheric and Oceanic Administration (NOAA) and released back to the wild on the island of Moloka‘i in December 2008.

But Hō‘ailona did not adapt well to life in the wild. He became habituated to humans, and as a result, he began hanging out at a po 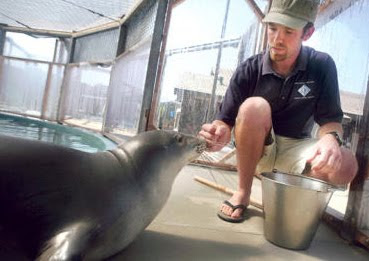 pular wharf and interacting with people in the water and on the beach of Moloka‘i instead of learning how to live as a wild monk seal.

As the seal grew larger, his interactions with people began to pose a risk to his health and well being, as well as to public safety. Finally, NOAA officials had to remove him from Moloka‘i. Before a new plan for returning him to the wild could be developed, veterinarians discovered that Hō‘ailona’s vision was seriously impaired; the young seal required further observation and possibly surgery.

In an unprecedented move, Hō‘ailona was transferred to UCSC (Santa Cruz) where facilities were available for his care and for determining the best treatment for his eyes.

Currently, a team of marine mammal scientists and veterinarians are 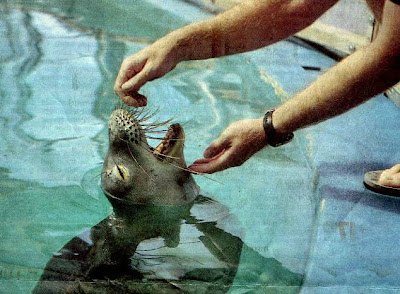 evaluating Hō‘ailona to assess his overall health and appropriate treatment plan. During his time in California Hō‘ailona is also learning to participate in scientific research that will provide data for the preservation of wild monk seals. Once he completes his treatment and rehabilitation, the plan is to return Hō‘ailona back to Hawai‘i where he can live as an important ambassador for monk seal conservation efforts worldwide.

Five tips for a woman

1. It is important that a man helps you around the house and has a job.

2. It is important that a man makes you laugh.

3. It is important to find a man you can count on and doesn't lie to you.

4. It is important that a man loves you and spoils you.

5. It is important that these four men don't know each other!
Posted by Don Meyer at 1:43 PM