OH NO! NOT AGAIN! 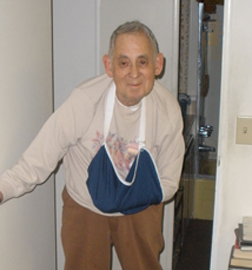 Unfortunately, yes.  I fell.  Yesterday morning.  I won't go into the gory details of how it happened, but while my shoulder hurt (still does), it didn't feel like a break.  As if I knew what a break would feel like.

So I went to see my chiropractor who advised me to go get an x-ray.  It turns out that there is an acute care center just down the street from my place, or as Cliff described it, just across the street from Baskin Robbins.

After the usual paper work, they x-rayed my shoulder.  (8 x 10 glossy prints available on request.)  Diagnosis?  At first they thought it was a rotator cuff injury, but then came back to say that there might be a slight break in the area of a previous break.  And it might be that slight break and rotator cuff.  Marvelous.  In the meantime I'm wearing that sling.  It doesn't hurt if I don't move.

Miriam Hopkins vs. An Anonymous Singer
Anonymous singer:  You know, my dear, I insured my voice for fifty thousand dollars.
Hopkins:  That’s wonderful!  And what did you do with the money?

Bill Clinton vs. Dan Quayle after Quayle revealed that he planned to be “a pit bull” in the 1992 campaign against Clinton and Gore.
Clinton:  “That’s got every fire hydrant in America worried.”

Reverend Edward Everett Hale vs. The U.S. Senate when asked if he prayed for the Senators.
“No, I look at the Senators and pray for the country.”

Winston Churchill vs. a Member Of Parliament  MP:
"Mr Churchill, must you fall asleep while I’m speaking?"
Churchill:  "No, it’s purely voluntary."