A beautiful and striking design.  Apparently these are renderings; not actual photographs.

It will be both an observation tower, and a welcome sign for the visitors arriving by air and by sea at  Rio de Janeiro , where the Olympic Games 2016 will take place.  The project is from Zurique, and utilizes solar energy during the day with its solo power panels, to pump the sea water as seen in the model. The movement of the water will be also utilized to turn the turbines and produce the power to work the system at night time. 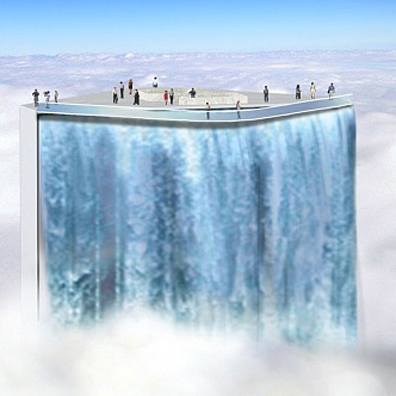 In the Solo City Tower is the Cafe amphitheater, auditorium and shops. E lifts will take the visitors to the top, where the view will be fantastic, and bungee jumping will have a special platform.  (Just what I’ve always wanted to do -- bungee jump!  Yikes!!) 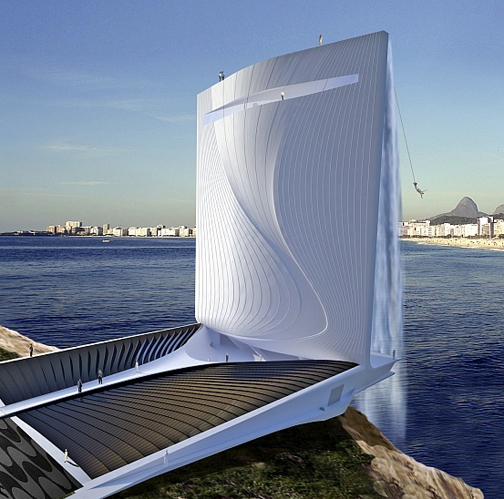 This vertical structure will be placed in  Cotonduba Island 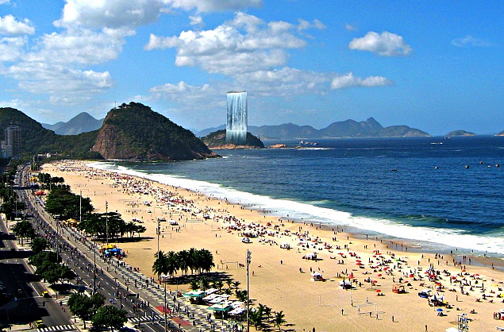 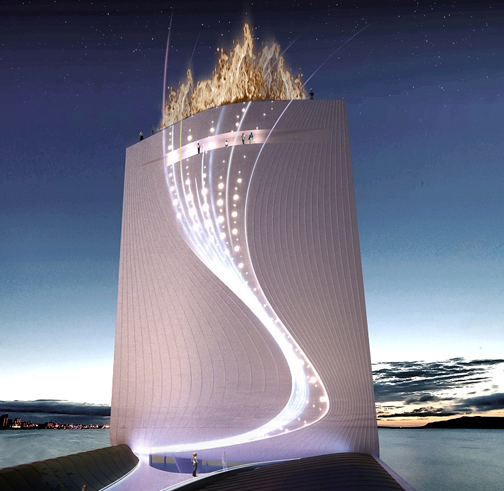 * * *
About a month ago I talked about a stretch of El Camino near the shopping center I use that was in a terrible state.  I'd gotten an answer back from the city that they would start repairs about the end of October.  Well, they must have decided that the stretch was too dangerous to leave too long because I was down that way today, and they have what looks to me like a temporary repair.  I scootered over it, and it was fine!

* * *
Fun --
This story is the first I ever received via email.  The story has to take some liberties with fact, so just enjoy, or laugh, or grunt, or ...

It seems that the Seattle symphony was going to have a performance of Beethoven’s Ninth Symphony.  And according to the story, there is a long section in the final movement where the string basses have nothing to play, so at one of the rehearsals, one bass player suggested to the others that rather than sit like lumps on their stools, that they move off-stage.  The others agreed, and on the night of the performance, they did so.  Backstage, the instigator said, “Since we have so much time, let’s go across the street and grab a couple of beers.”  And they do.  After a while, one of the other musicians is getting a bit nervous, and says, “Shouldn’t we be getting back?”  The instigator says, “Naw, I’ve got this all timed out.  Besides, I tied a string around the conductor’s score, so when he gets near that part, he’ll have to slow down while he tries to conduct with one hand, and untie the string with the other.  Let’s have a couple more beers!”  So they do, and by the time they start back across the street, they are a bit, er, ah, tipsy.  And as they get back onstage, they can see that the conductor is absolutely furious!  As well he should be.  For here it is, the last of the Ninth, the score is tied, and the bassists are loaded.
Posted by Don Meyer at 3:40 PM