More amazing photographs from friends who forward them to me. Even the following text was part of the email.

Icebergs in the Antarctic area sometimes have stripes, formed by  layers of snow that react to different conditions.    Blue stripes are often created when a crevice in the ice sheet  fills up with meltwater and freezes so quickly that no bubbles form.    When an iceberg falls into the sea, a layer of salty seawater can  freeze to the underside. If this is rich in algae, it can form a  green stripe.    Brown, black and yellow lines are caused by sediment, picked up  when the ice sheet grinds downhill towards the sea. 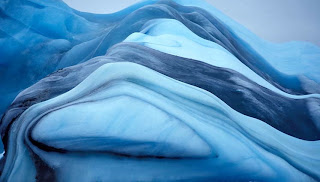 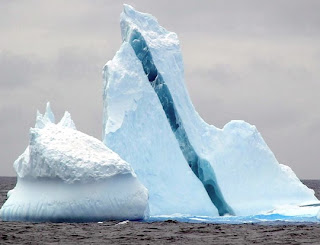 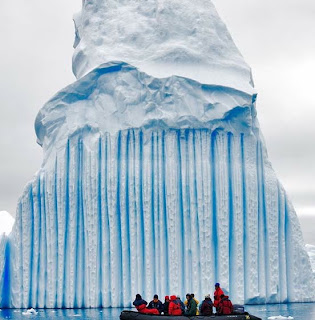 The water froze the instant the wave broke through the ice. That's what it is like in Antarctica where it is the coldest weather in decades. Water freezes the instant it comes in contact with the air. The temperature of the water is already some degrees below freezing. 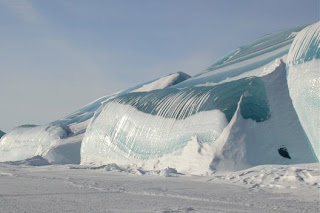 Couple in their nineties are both having problems remembering things.  During a checkup, the doctor tells them that they're physically okay, but  they might want to start writing things down to help them remember  Later that night, while watching TV, the old man gets up from his chair.  'Want anything while I'm in the kitchen?' he asks.  'Will you get me a bowl of ice cream?'  'Sure.'  'Don't you think you should write it down so you can remember it?' she asks.  'No, I can remember it.'  'Well, I'd like some strawberries on top, too. Maybe you should write it down, so's not to forget it?'  He says, 'I can remember that. You want a bowl of ice cream with  strawberries.'  'I'd also like whipped cream. I'm certain you'll forget that, write it down?'  she asks.  Irritated, he says, 'I don't need to write it down, I can remember it!  Ice cream with strawberries and whipped cream - I got it, for goodness sake!'  Then he toddles into the kitchen. After about 20 minutes,  The old man returns from the kitchen and hands his wife a plate of bacon  and eggs. She stares at the plate for a moment.  'Where's my toast ?'
Posted by Don Meyer at 2:45 PM